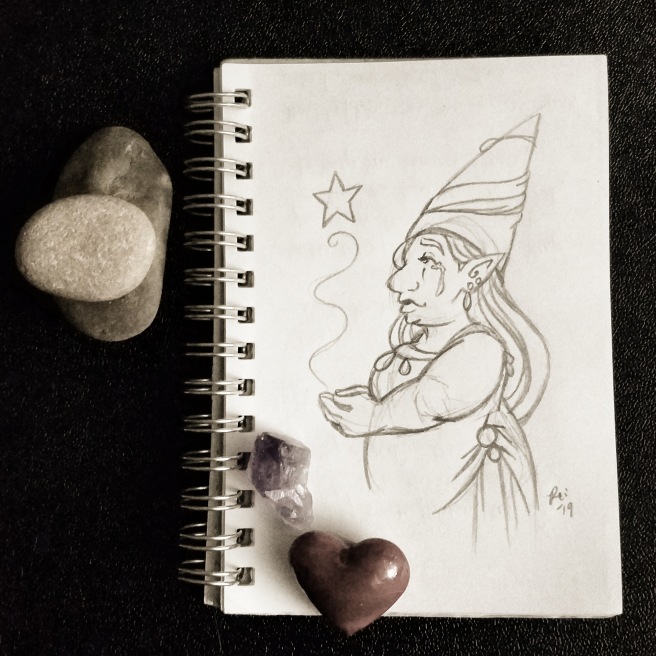 Something calm and healing and magic. Hope your week starts brightly and smoothly, everyone!

A bit of catchup on this Gnomish devotional day ❤ 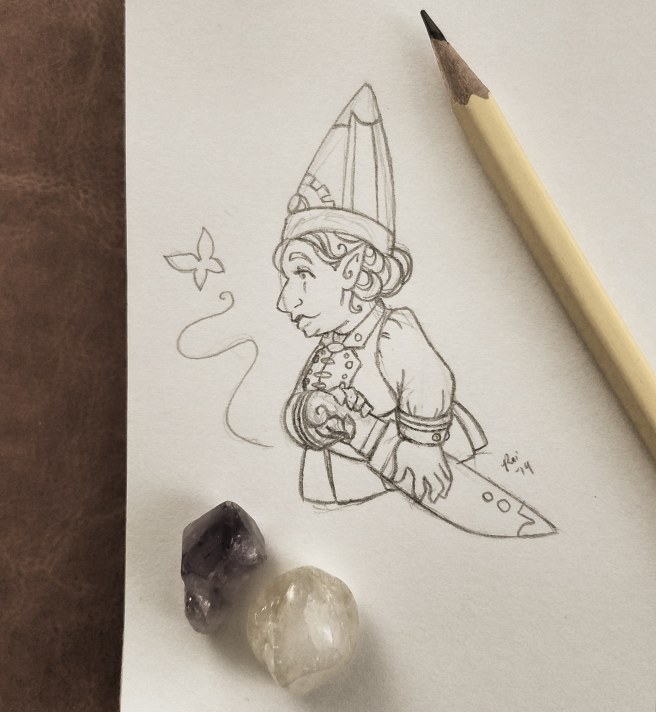 Today’s proper post featuring a Gnomish soldier of the “Tock the Gnome” variety, taking pause in drawing her sword.

(I needed something fierce but peaceful after the announcement I chose to make yesterday.) 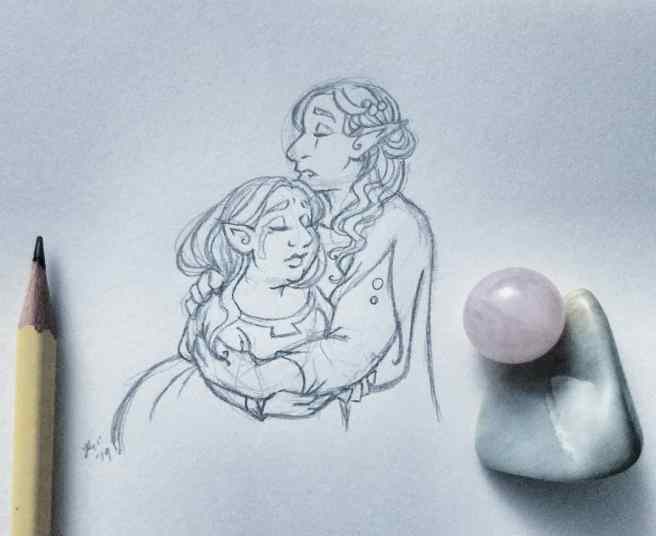 And a bonus! Inspired by last night’s Lore Olympus episode. Thank you, Rachel Smythe, for handling Persephone’s trauma so beautifully. 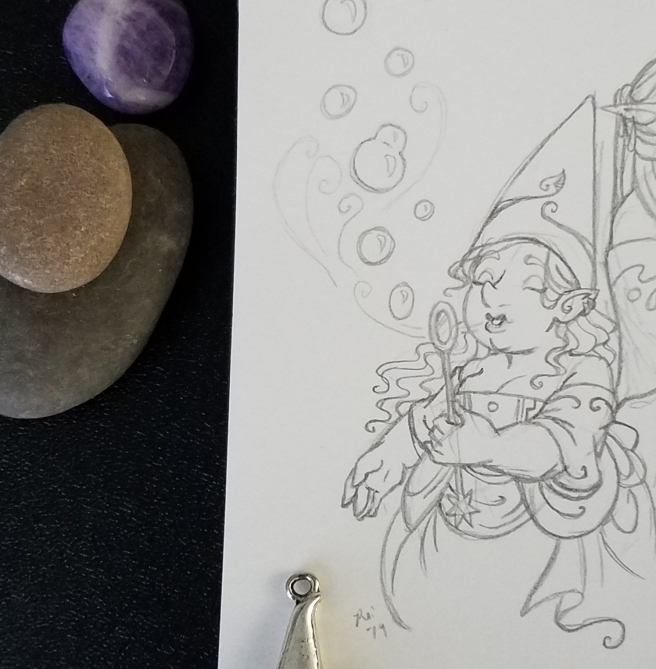 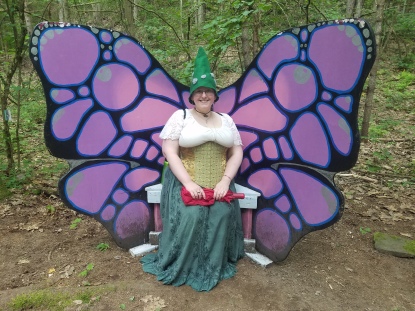 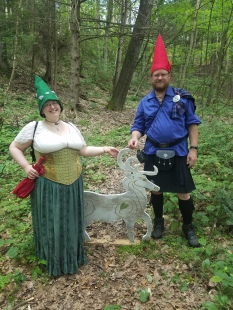 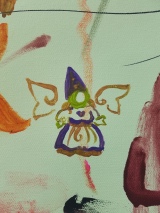 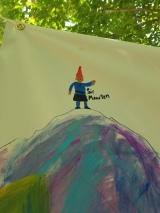 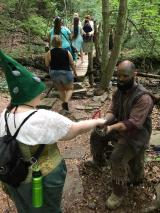 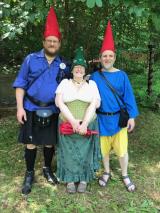 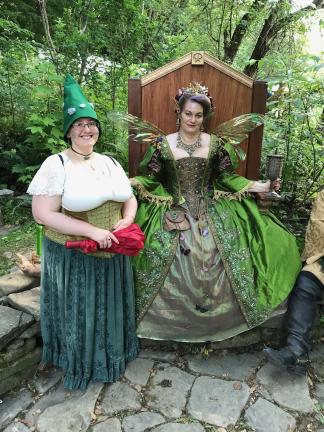 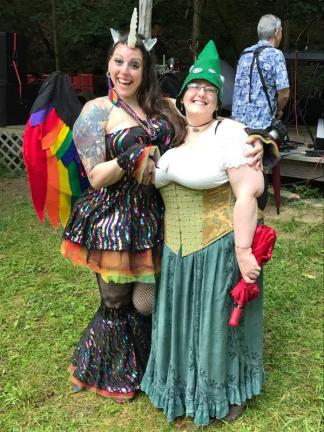 As for last week, I visited New York Faerie Fest with a dear Gnomish friend, so here’s some extra Gnomish celebration and the proper drawing of Tock – combined with the usual patrons-only drawing of Mariatu, click here to see the full thing!

(Guest starring Mark Roloson and a painting of his Sir Maarten, another unnamed Sir Gnome who I will credit if/when I find out his name, an honorable Troll, the Faerie Queen Herself and the leader of Mythical Beasts!)

Thanks as always for your patience, followers! June was bananas but July should be calmer, so fingers crossed for getting back to posting as regularly scheduled/intended! 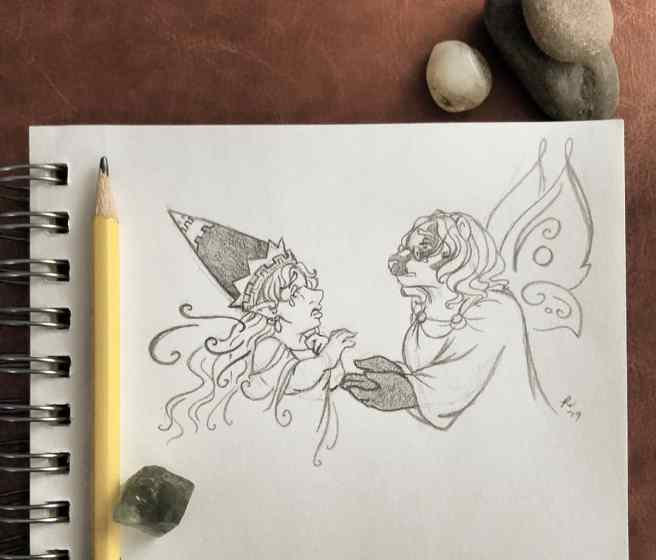 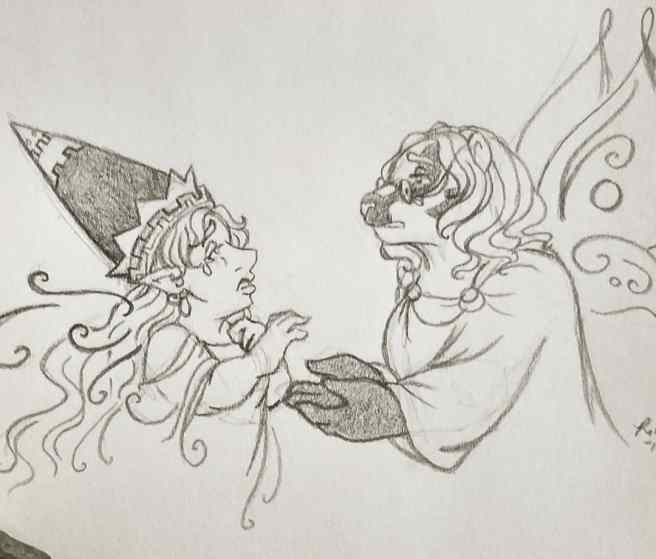 Once again I chose the Light/Seelie theme. So here’s something from “Tock the Gnome” backstory, two characters that need healing and could reach for it, in their union. But will they? 💗 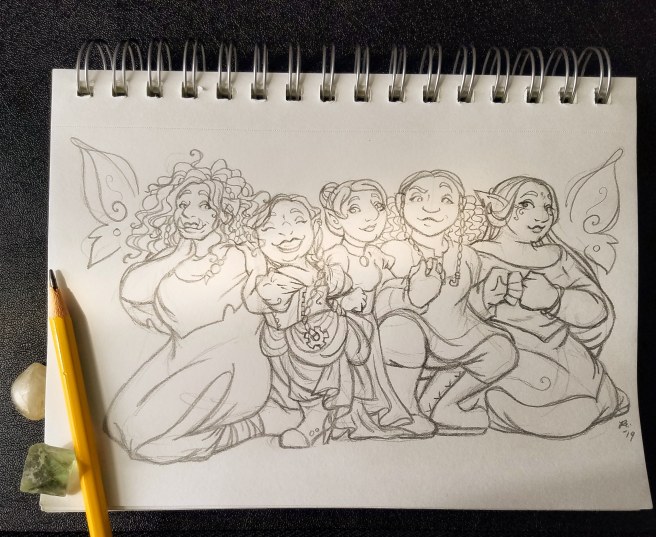 Inspired by the Seelie side again – in honor of International Women’s Day, the Tockverse ladies (or at least as many of them as I could fit on the page) are here in solidarity. Growing together from the gift of all their varied relationships, individual strengths and differences.

True strength comes from that place of togetherness and cooperation, not competition. May we all build each other up and inspire each other, too! 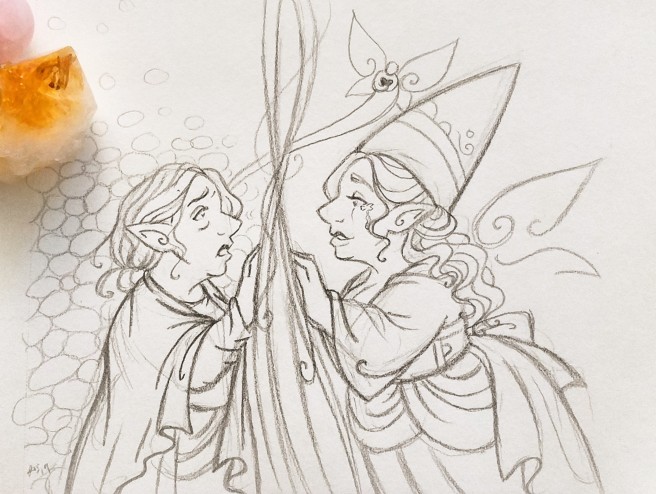 Inspired very, very much by the most recent episode of “Steven Universe,” especially the song at the end of it:

I don’t need you to love me, I love me

But I want you to know you could know me

If you change your mind”

(Thank you, Crewniverse, for such a healing, loving show.) 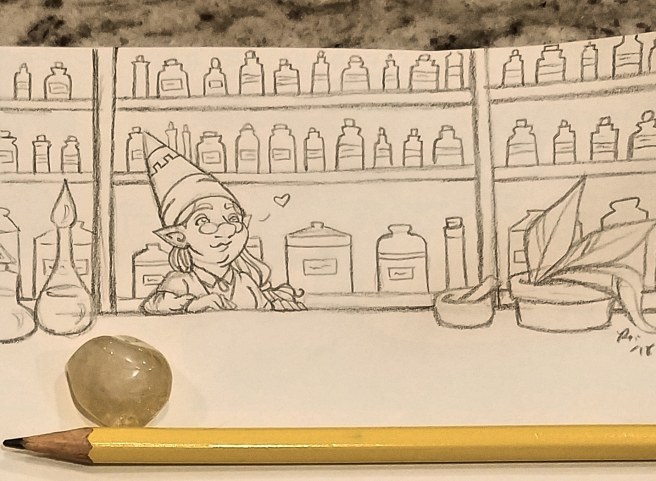 Since the Gnomes of “Tock the Gnome” do not have access to magic, they rely on physicians and their physics (medicines) for any ailments. And who makes those medicines? An apothecary! ….This absolutely does not match what I had in my head btw, but I hope the idea is still charming 😅 Also hoping/planning to develop this thought more in the future. Keep an eye on World Building Wednesday for that! 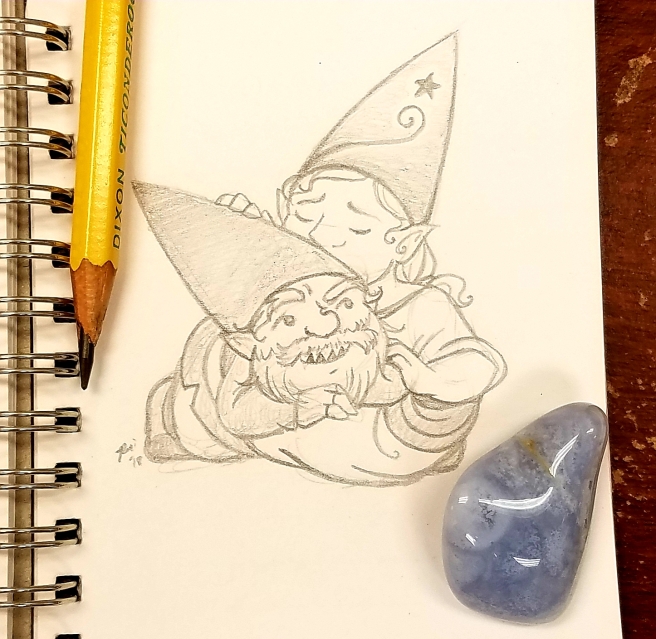 I’d said before that I began it because I was upset with a certain TV show’s depiction of my favorite faerie folk. That show showed them as vermin – even called them so, basically treating them like snacks for the Trolls or pests at best. They appeared unintelligent, less than animals even in their treatment of each other and other peoples (though who can blame them, with what they’d been through…) They’re all male, apparently. And their skulls spiral out of their head into points, to “explain” the hats? …What?

Despite my rage, “Trollhunters” is SUCH a good show that I couldn’t stop watching. I came very close. But…yeah. And things do get a little bit better – there is one Gnome character who shows us that Gnomes ARE more than what the Trolls claim they are, and the mentions of eating them and their place as rats lessen as the series goes on.

I am grateful for that, and for the fact that my anger at this depiction motivated me to do more with my own Gnomish work. I must confess that I tried to keep anonymous about which show provided that motivation at first – and I have, for the most part – but with the show being over now I feel like it’s okay to be specific.

And to give thanks, and honesty.

I’ve been drawing a new Gnome every Sunday for over a year now and I have only found it rewarding, really in so many ways.

So in honor of how this started, and the fact that “Trollhunters” is indeed a great story despite this insult, here is something specifically in tribute to the Gnomes of Arcadia. Picturing them here with Blue Lace Agate, which fosters peaceful communication, clarity of thought and intent, in regards to what matters most (paraphrased from CrystalVaults.com ).

Also, as you might imagine, I have some headcanons now that help me deal with how my people appear on the show. Allow me to share them with you:

~ Before the Trolls left Europe, Gnomes were much like we see in “David the Gnome” (From the amazing “Gnomes” book series, btw) but the Trolls assumed they are barbaric creatures because of the long-standing animosity between their people – they couldn’t understand them, they never saw their homes and communities because the Gnomes kept them so well hidden, and the Gnomes they did encounter were always causing them harm and trickery (in order to escape being eaten, of course. But still).

~ The Gnomes that were captured by the Trolls and taken across the sea on the Mayflower reacted badly in their trauma to that experience (kidnap, torture, murder by eating) and degenerated into what we see in the show. Depending on how many female Gnomes were taken, there may have also been some inbreeding.

~ Speaking of females, Gnome women DO exist, but are kept very much hidden for protection – similar to how they were treated in their previous communities, since David-style Gnomes do have that gender stratification too*, but that need for protection is even worse now that they’ve gone through the Mayflower Trauma. They are also very likely just as damaged from the experience as the males are.

~ The Arcadia Gnomes have some kind of cultural memory about what their lives used to be like, at least in terms of family life – when Toby takes in Gnome Chompski, he starts living the a dollhouse and imprints on the Alien Doll as his wife, even having a “baby” with her in the form of a peanut. He couldn’t have learned that from Toby’s family setup, since Toby lives with his Nana, and they didn’t really show Trolls having Traditional Family Units or whatnot. So I believe that they remember – David-style Gnomes very much have that family setup, so where else could Chompski have learned it? (Note: I have forgotten whether or not Chompski watches TV, in which case he might have seen it on a show, to which I reply that may have triggered the cultural memory he already had.)

~ Gnomes do still exist in Europe, just in fewer numbers – Blinky says the Trolls left Europe to find peace, so assuming the remaining Gnomes also felt threatened, I imagine they would have withdrawn even more for safety too. Since they didn’t go through the Mayflower Trauma, they have retained their intelligence and culture, but they do keep entirely to themselves now.

*Obviously the gender stratification of David-style Gnomes is problematic in many ways, too, so I don’t mean to offer that as a 100% perfect alternative to what we see on the show. I’m just going from what the show shows us – design-wise, in terms of their stature and their clothing, they look very similar to David-style Gnomes. So I am assuming other cultural connections based on that design.

I hope you enjoyed this read-through of of my Arcadia Gnomes thoughts – thank you again to the people of “Trollhunters” for inspiring me to push my Gnomish Devotion even further, and for the good parts of the show (which is basically everything else). I can’t wait to see what happens in Arcadia Oaks next!

And thank you to all of you, my followers, for all the likes and comments! Doing this series has been very rewarding, as I said, and I look forward to even more Gnomish devotionals in the future. 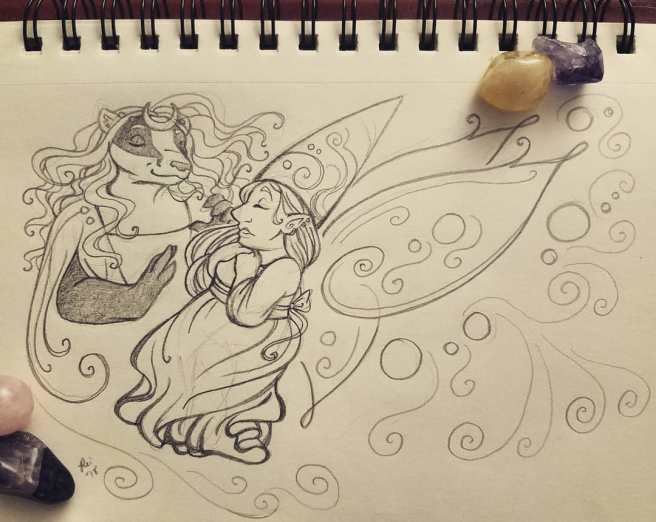 Actually started drawing this one a while ago, but now’s the perfect time to finish it up, isn’t it? 🙂